How does a company position itself for growth and remain competitive in constantly evolving tech space? As the modern age of New Media continues to accelerate the pace of business innovation, no company- large or small is immune to the importance of evolving and growing with the current trends. In 2012, Yahoo! and Facebook were firmly established as technology companies, but leadership in both saw a tremendous growth opportunity in the rapidly growing mobile market. Smartphones and their associated apps were becoming the standard both in business and in personal use the fundamental approach in integrating their business model with this new technology would ultimately make Facebook flourish, and Yahoo! falter.

In 2012 Marissa Mayer became the CEO of Yahoo!. She had the vision to shift the company to a predominantly mobile focus and by the end of 2015 that revenue had brought in almost $300 million dollars- accounting for over 20% of the company’s earnings. Despite Yahoo!’s aggressive approach, this growth was not enough to maintain market share. Yahoo!’s ultimate sale to Verizon completed what Forbes termed as, “its long march to irrelevancy.”
In the same year, Facebook was in a similar position, with an awareness for the need to grow into the mobile arena. Over the same three-year period Facebook managed to bring in $4.5 billion dollars with its mobile strategy resulting in 80% of total Company revenue and has seen its market share value uptrend comparatively.
Two companies, with a similar focused goal. What made the difference?

Yahoo! was a predominantly content-driven advertising model, with articles and newsfeed as its objective. Facebook had communication between users as its primary function. With the growth of the Facebook Messenger app and the website itself, users were found to check their feeds and chats with compulsive behaviors, oftentimes returning several times per hour. Facebook continues to evolve along this trend by incorporating Facebook Live, which streams live video, further rewarding both users and advertisers with instant fresh content to be consumed. Yahoo! had a Chat feature built into its platform, but realized too late just how important it should have been to the business model.
This comparable analysis leaves us asking: Why the disparity when comparing the two growth potentials? The answer lies in content vs communication. Prior to the rise of the smartphone as the ubiquitous equal to the desktop computer, the web had predominantly functioned as a content medium – a place for information and media exchange. Communication apps existed but had been limited to being a part of the larger function of a website. But in 2017, user-interfaced apps such as Instagram and Snapchat have become the standard-bearer for the generation who have always known a world with WiFi and seamless technology in hand.

So where does this leave business seeking growth in the ever-changing technology landscape and the battle to gain broad user adoption? A solid mobile strategy is essential for any company to remain viable in the coming years. In addition, having a deep appreciation for the speed of evolution, as well as being able to nimbly adjust, best positions companies for whatever the future may hold.

American adults are spending 53% more time with digital media than they were three years ago. 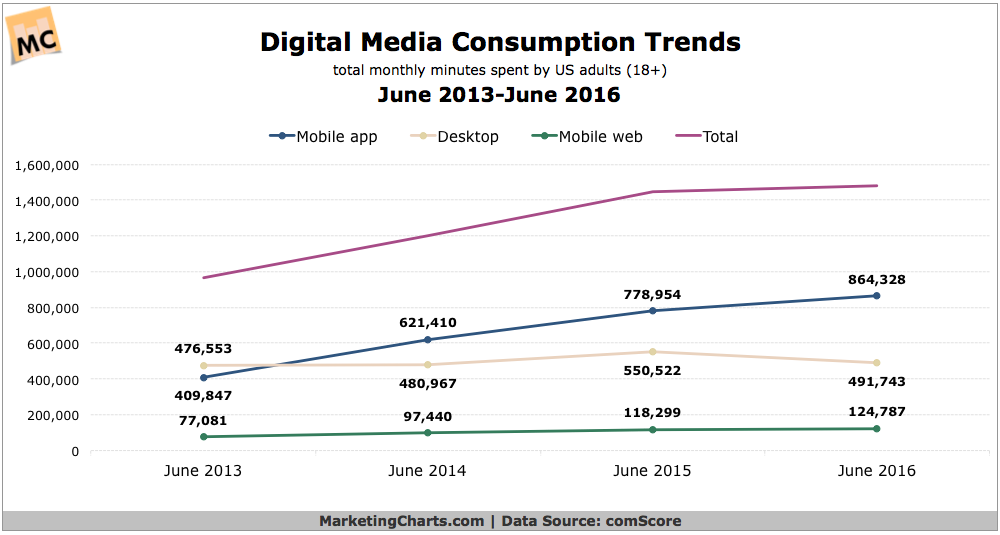 Digital media engagement and Internet usage shifted by two-thirds from desktop to mobile. 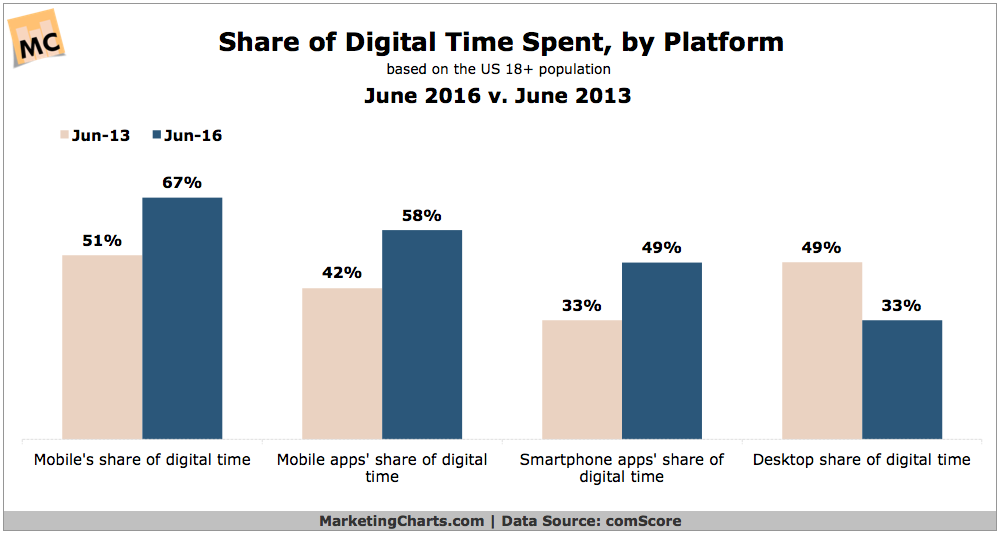 Nearly every age demographic has adopted the use of smartphone applications as the dominant channel for media consumption with tablet applications coming in second. 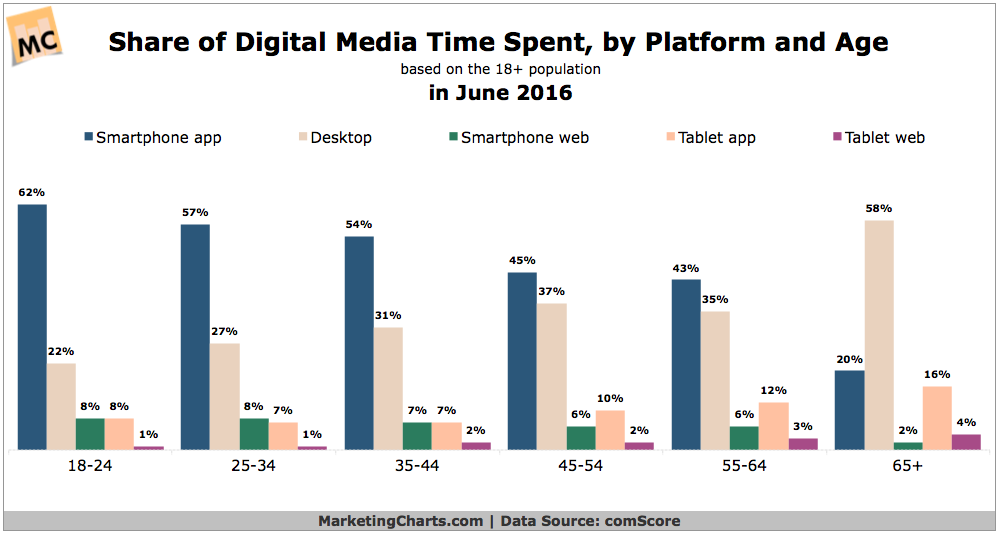 A combined mobile web and mobile application strategy is critical to fully engage your market potential.
Mobile web continues to lead the way with user acquisition while mobile app dominates user engagement. A combined mobile strategy neatly marries retention and growth and are mutually dependent on one another.

Not surprisingly mobile application usage is projected to grow at a steady rate over the next two years while mobile web usage grows is expected to flatline. 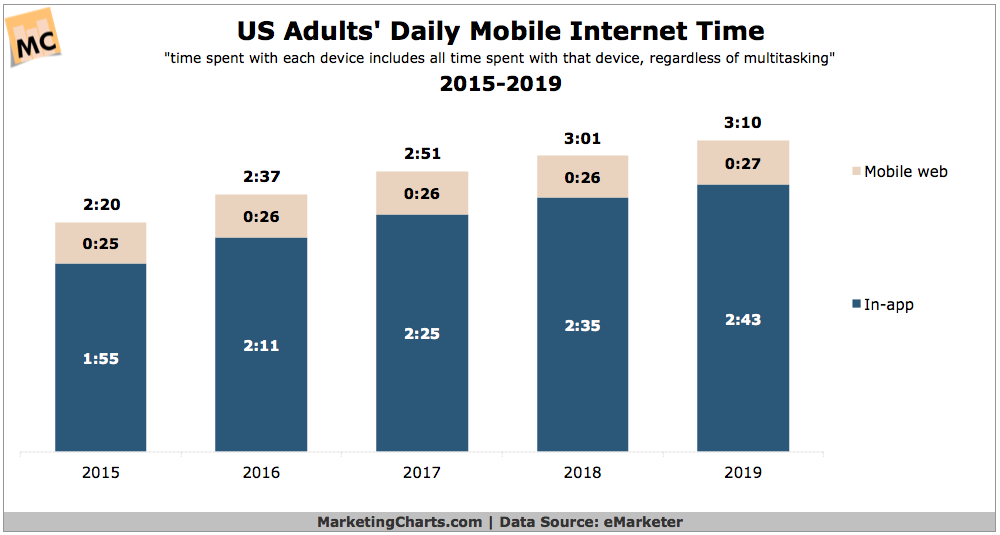 All charts are used by permission from marketingcharts.com.